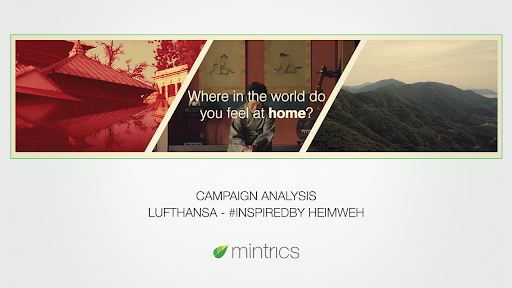 Today’s campaign analysis is about the successful brand Lufthansa. Exclusive to you by Mintrics‘ online video analytics tool.

In order to have a successful marketing video or an advertisement, you have to include certain elements in your video. Here, we will explore how a major brand like Lufthansa used video to inspire their audience to travel, generate interest in their services and shed a positive light on the brand using #inspiredby HEIMWEH video campaign. The agency responsible for the campaign is Neuer and Herzer, a German digital agency located in Berlin with many high-profile clients, such as Hyperloop, Lufthansa and Mercedes-Benz.

Lufthansa started the campaign on the 5th of October by releasing a 30-seconds teaser video on their Facebook page titled “What is Heimweh?” to help you clearly understand the story, this short-form video states the theme of Lufthansa’s campaign which is about the word “Heimweh”

Heimweh is “your birthplace, a place you always feel connected to. Despite all potential detachment, it’s literally your origin of personal growth.”

Japan: Volcano of Our Childhood

On October 12th, one week later after releasing the teaser, Lufthansa uploaded the first video in the campaign to YouTube and Facebook. It was titled “Japan: Volcano of Our Childhood”

The video takes the audience on a journey with the Inoue Brothers, founders of the design/art studio named after them. The brothers grew up in Denmark, but they have never forgotten their Japanese heritage, and Lufthansa helped them find their way back to home.

The video also generated 32 comments on YouTube and 427 comments on Facebook with some very positive comments from the audience about the ad, such as:

“Most beautiful commercial ever. Nice job, Lufthansa. This hit right in the heart ?” –Acro Kill

“25 years in Japan and I’m still awed by it and this video – beautifully video-graphed – expresses this superbly.” –Guy DE LA RUELLE

Nepal: The Colors of Home

The second video was released Feb 28, 2017, and this time the destination was Nepal. This time, the video featured Arpana Rayamajhi, the NYC-based jewelry designer.

You can see her returning back to Kathmandu, and how the colors of her home city reflect her own designs and personal life.

People demanded a longer version and some said it was the first time they watched an ad to the end.

The third and final video in the campaign was published on July 24th, 2017, titled “Russia: A Home Unknown”

In this video, Lufthansa connects Emilia Schüle, the German actress, with her home country where she was born. Lufthansa directs your attention to personal identity and self-discovery.

You can also see the connection between you and your past and the various cultural influences and how directly they shape your personality.

We can learn many lessons from this campaign:
Each video was a perfect example of good storytelling. It told a beautiful story that the target audience can easily relate to.

Lufthansa used celebrities to expand the impact of the story on its audience. We can also see that Lufthansa used closed captions in their videos to maximize reach and engagement.

Was this campaign analysis informative? Share your thoughts in the comments below.