McDonald’s Brilliant Use of Videos for Digital Advertising | Campaign Analysis 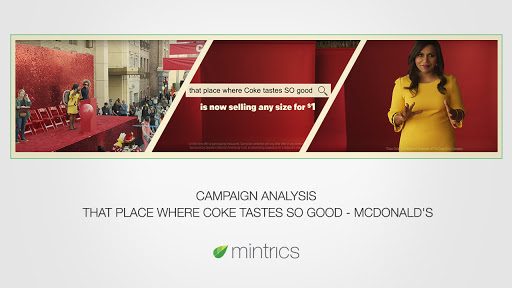 In our Campaign Analysis series, today we bring you a detailed McDonald’s Coke campaign analysis; how “The Place Where Coke Tasted So Good” resonated with McDonald’s customers.

We’ll explore how McDonald’s managed to fuse traditional video advertising with a digital experience. If you ever got the feeling that McDonald’s coke has a better taste than other fast food franchises, you’re probably right!

You’re not the only one. McDonald’s fans have certainly noticed and took it to the internet to search for the reason. For that, McDonald’s turned it into a brilliant campaign. In our McDonald’s coke campaign analysis we’re going to give you a deeper look into how they made it.

It all started on April 10th, 2017 when a YouTube channel named “That place where Coke tastes SO good” posted a video titled “Search it”

The video featured Mindy Kaling, star of popular TV shows, such as The Mindy Project and The Office. She was wearing a yellow dress against a red background… Sounds familiar?

Well, she told the viewers to google the phrase “That place where Coke tastes SO good” That’s it. That was the ad. No mention of McDonald’s during the 15 seconds at all, not even once!

Three days later, the second video of the campaign was released, on the same channel. Titled “That Place” an extended 30-second version of the original video.

In the additional 15 seconds of this video, Mindy capitalizes on the result people are going to find when they google the phrase.

What’s brilliant about this campaign is that McDonald’s hasn’t set up a specific landing page or a paid search ad related to the keyword. They leveraged the ALREADY ongoing online conversation about their product without using any additional resources.

In the third and final video before the big reveal, we can see multiple items in the video with McDonald’s logo blurred.

Finally, the secret is unraveled in a 4th video, titled Cancelled, that was uploaded by McDonald’s official channel on YouTube. In the video, we see multiple celebrations that were supposed to take place along with the reveal.

However, though, they decide to call it off last minute. By the end of the video, it’s revealed that the place has been McDonald’s all along, and the logo finally appears for the first time.

How did the campaign do on social media?

So what did the fans actually think of the campaign? Let’s see numbers…

During the analysis, we noticed that the total number of dislikes (13,264) outweighs the number of likes (9,181)

Unfortunately, McDonald’s has disabled the comments on the videos, so we can’t get direct audience feedback about the reason why. But!

Most of the comments are positive, confirming that they prefer McDonald’s Coke better while the negative comments mostly relate to the service. Which might explain the number of dislikes we mentioned earlier.

Did the campaign achieve its objective?

The search results from our McDonald’s Coke Campaign Analysis

1- Know Your Audience
The whole reason why McDonald’s went this route is that they targeted Millennials. According to Adage, the research showed “how they’re discovering information” they trust, said Deborah Wahl, chief marketing officer of McDonald’s for the United States.

2- Don’t Always Focus on the Hard Sell
This campaign was completely unbranded, yet it was a major success. Instead of droning on about how tasty their Coke is, McDonald’s used UGC and minimum resources to highlight the benefits they offer. This resonated well.

“Millennials are very influenced by word of mouth and what their peers say” Ms. Dahl says.

3- Integration and Active Participation
The campaign aired on TV and was posted online on a new channel and other forms of digital advertising. They were all fully integrated with each other to deliver the maximum impact. The campaign also turned passive viewers into active ones.

Most people nowadays use their phone while watching TV. McDonald’s managed to capture that cross-screen experience effectively.

Check out how to get better reach through social video marketing

4- Aim for the Best – Expect the Worst
Ms. Wahl said that they expected a positive result, however, they prepared for the worst. Anyone could have applied SEO techniques to manipulate the results, for that, McDonald’s were at the ready.

They made an ad where Mindy Kaling guesses who could have subverted the results.

Compilation of all the ads used in the campaign

How do you find our McDonald’s coke campaign analysis helpful? Tell us what you think in the comments section below!