The New YouTube Redesign Feature is Everything Creators Wanted 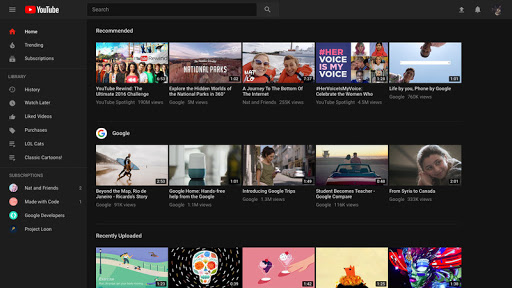 Youtube surprised us with new updates to its mobile app and desktop versions. With these new updates, the Youtube redesign feature aims to increase functionality and create a consistent visual identity across different devices. The video-sharing giant has been evolving quite rapidly in order to align its direction with both, the audience and creators’ demands.

Did you visit Youtube today and noticed anything different? That’s right, the old logo is no more! The updated logo was designed with multi-screens in mind as it’ll have better visibility on smaller-sized screens. The new design also seems to be focusing on Youtube’s greatest asset, the play button.

The logo wasn’t the only major change applied, the desktop version also got a makeover.

The new YouTube redesign feature applies the principles of material design and will make it easier and more comfortable to browse the site. In addition to better shedding the light on content rather than other visuals.

Youtube also introduced a feature that many users have sought for a long time, the Dark Theme. This new theme turns the background black making for a cinematic experience. Cheers for all night lovers!

The navigation tabs were moved to the bottom of the app while now you can see the new Library and Account tab were added. However, earlier this year, YouTube introduced that lets you fast forward or rewind a video by double tapping on the side of the screen.

It’s announced now that they’re thinking of adding a feature that will allow the user to move between videos by swiping left and right, which would be amazingly great.

Another great youtube redesign feature in the mobile app is the switch between slow/fast motion. Previously, you could only watch the video in slow motion or speed up playback on the desktop.

Now you’ll be able to do the same thing in the mobile app. Yaayy!

Say goodbye to black bars when watching a vertical video, now the app will adapt to any video format (vertical, square or horizontal). Finally, for better content discovery on YouTube, you’ll be able to view suggested videos to watch while in full-screen mode.

Not just that, YouTube has promised more updates to come. They are certainly planning on keeping their promises.

According to Android Police, YouTube is currently testing a live watching now count. This feature will be mainly important to vloggers, they will be able to see their video in the process of going viral. This could also encourage people to watch videos more, as it can be considered as a social proof.

Want to get personalized updates on online video marketing? Signup to our newsletter and you’ll get notified whenever updates are announced!